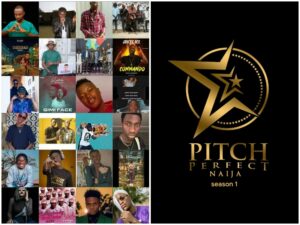 Stating with clear fact and well design graph of promoting the jos entertainment industry, the lead organizer of the pitch perfect Naija show “Elmore Hodus has announce the preforming of only jos artists in the grand finale of the event.

This was shared on a post made by Elmore of how he has come up with a strategy to promote the industry and artist in the city of jos.

It was confirmed that the organizers of the show had it in mind to bring up top celebrity singers to the grand finale but later made a change of plan as advice by tinny entertainment singer YCEE who is also partnering with the organizer to bring this show to live.

However, the pitch perfect Naija show which will soon kick start in march has already made it way up through the audition of thousand participant and have already the 14 constant pick to be in the house.

Also in his post, he shares the price of ticket and how the sale of ticket will be on the grand finale..

Below is the screenshot 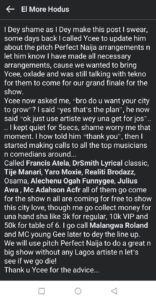